5 Rimac Nevera vs Ferrari F40 Drag Race Shows How Much Supercars Have Evolved
Car video reviews:
Up Next

CarWow's Mat Watson Crashes Multi-Million Dollar Rimac Nevera, No One Gets Mad About It

The Rimac Nevera has already proved its worth as being one of the quickest cars that money can buy. Not only that, but it has been crowned as the quarter-mile champion for production vehicles, having completed the run in a neck-snapping 8.582 seconds, with a 167.51 mph (269.58 kph) exit speed.
9 photos

This is definitely not a lightweight machine, as it tips the scales at 4,740 pounds (2,150 kg), which makes it roughly 340 lbs (155 kg) heavier than one of its biggest rivals, the mighty Bugatti Chiron. That said, with so much oomph available via the right pedal and exotic looks inside and out, it’s no wonder that every petrolhead and their pet want to check it out in person.

CarWow’s Mat Watson has been fortunate enough to get up close and personal with the Rimac Nevera, though in a rather unusual way, at first glance, which led to the hypercar’s destruction. But fret not, because the famous journo didn’t actually crash it as a result of being too cocky, as this was part of the model’s safety testing before being approved for sale in the United States.

With an average-sized dummy placed inside, the Nevera was launched from 0 to 22 mph (0-35 kph) sideways into a pole, to see if the structure can withstand such an impact. So, at the flick of a switch, the zero-emission machine was projected into the heavy structure, and you are literally one mouse-click away from seeing how it did. 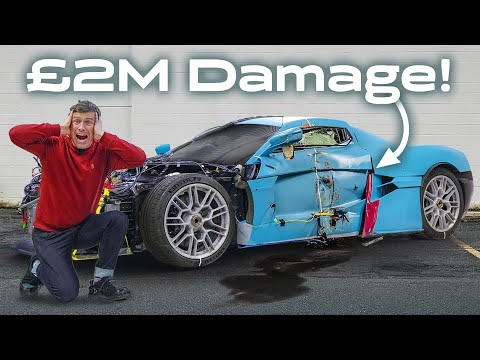