1 Rimac Nevera Is Fighting for Grip at the Strip, Still Launches Like a Rocket

Home > News > Auto Motorsport
Cristian Gnaticov
In case you missed it, the Tesla Model S Plaid is no longer the world’s fastest accelerating production car down the quarter-mile. That title now belongs to the Rimac Nevera, which managed to complete the course in a jaw-dropping 8.58 seconds, at 167.5 mph (269.6 kph).
6 photos

You don’t have to be a connoisseur to tell that the Rimac Nevera is an absolute monster, but how does it actually compare to an older supercar, like the Ferrari F40? The answer came via a video shared on YouTube recently by SupercarsOfAustria, which shows a drag race between the two.

The Italian model stands no chance against the modern zero-emission ride that puts it in its corner in just a few seconds, revealing how much exotic machines have evolved since the F40 came out in 1987.

Now, besides lining up at the start line next to the classic Ferrari, the Nevera also did a few controlled burnouts, warming up the tires in front of the crowd and leaving some big skid marks on the asphalt. This is the part where we invite you to scroll down and click the play button to see the Rimac in action. 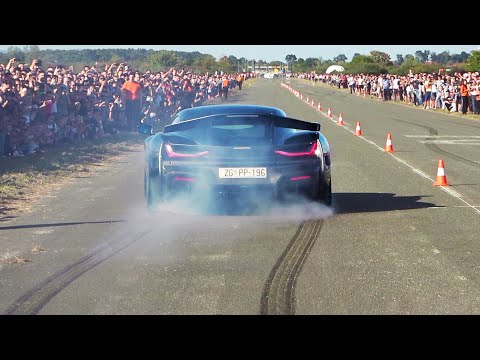