2 Here Are the Coolest State Trooper Cars in the U.S.

5 Ivory Comet Is A Custom Harley-Davidson Sportster 1200 Bred in Cali
Car video reviews:
Up Next

New Android Feature Comes in Handy If Your Car Gets Stolen

The Hindes brothers learned to work on their own bikes from a tender age and, as a result, came to be wired into motorcycle culture. That led the brothers to make motorcycles their lifelong craft and obsession. They formed Prism Supply to fill what they perceived as a void in modern consumerism.
8 photos

The Hindes brothers’ dad told them, “If you’re gonna ride it, you better know how to work on it.”

From there, he looked on and assisted the brothers as they began the journey. The brothers ultimately honed their trades via hours of greasy, hands-on fabrication for elite race teams.

For his part, Jake pushed on the extra mile to earn a degree in engineering. Today the Hindes brothers work cheek to jowl inside their shop in the heart of Charlotte, North Carolina, in the Camp North End neighborhood.

It was roughly half a year since the brothers discovered and completely restored a piece of important motorcycling history they called Bronco Bronze, a 1952 Harley Panhead they rescued from inside a leaky storage container.

Now, this rock-solid Panhead hammers along the same roads and streets it once covered more than 60 years ago for Melvin Graham, the man who originally bought this American jewel.

During the teardown process, the team inspected and cataloged each part and piece. Along the way, they discovered that the iconic engine was in better condition than they could have imagined and the vast majority of original components were in good condition.

The speedometer was mechanically restored by John Bordas and the rusty spokes were replaced with NOS versions, while its wheels got fresh rubber from Coker Tire. The carb was rebuilt and the brothers did a complete overhaul of the brake system including new cables and pads. Their friend, Matt McManus pitched in to help to identify and providing various parts. 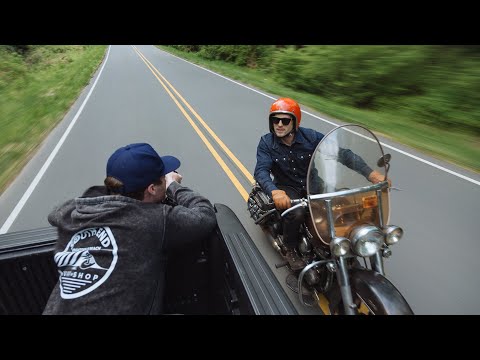