4 King of the Baggers Returns in 2021 With 5 Races, Indian and Harley at It Again

5 Last Year Indian Beat Harley on the Track, Now You Can Do It on the Road
Car video reviews:
Coverstory

It’s not long now until the first-ever MotoAmerica King of the Baggers series kicks off. It will happen this weekend at the Michelin Raceway Road Atlanta when Harley and Indian baggers will line up on the starting grid of the first-of-three race in the competition.
15 photos

The King of the Baggers event was first held last year as a single race that went down in history. Then, two specially prepared Indian Challengers, ridden by Tyler O’Hara and Frankie Garcia, not only managed to fend off a large pack of Harley-Davidsons but clinched the first and last positions of the podium.

Harley is not willing to let that happen again this year, or let things to chance. It announced not long ago how it would be fielding a factory team for King of the Baggers, with rider Kyle Wyman manning the a specially-prepared Road Glide Special with a modified engine.

With just a few days left until the start of the competition, Harley published a video presenting the rider and the Screamin’ Eagle Factory Racing Team as they prepare for the series. Intermixed with the crew's personal stories are images showing the Road Glide that will go up against last year’s winner—you can see them in the attached gallery or the video below.

The full details on the motorcycle have not yet been revealed, but we do know it will be making use of the full 131 ft-lb (177 Nm) of torque developed by the most powerful street-compliant performance engine currently has to offer, the Screamin’ Eagle Milwaukee-Eight 131.

As said, keep your eyes open this weekend for the first King of the Baggers race of the year. It will be followed in mid-June by the one at Road America Elkhart Lake, Wisconsin, and in July by the one at the WeatherTech Raceway Laguna Seca in California, where it all started last year. 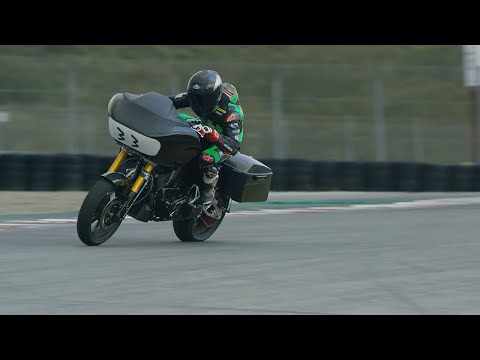