BMW's M760Li has been a real dark horse of 2017. The Germans talked it down as "not a real M car," but it's everything some people wanted and more. However, the all-new Panamera Turbo is a not to be taken lightly. It sounds like we have a serious fight on our hands!
5 photos

Obviously, these two aren't very similar. One looks a little bit like a coupe while the other features a stretched wheelbase and plenty of uber-luxury features. But the two 4-door models share a passion for speed.

The M760Li features the bigger engine, a twin-turbo V12 that makes it the most potent BMW ever put into mass production. With two liters and four cylinders less, the Panamera Turbo gets about 60 fewer ponies. However, it's the faster of the two.

While it's being suggested that this is down to the weight, we'd like to disagree. There's an Executive (long wheelbase) version of the Panamera Turbo that tips the scales at 2.1 tons, very nearly matching the Bimmer. While the numbers are close on paper, Porsche usually underrates its car, just as we saw during the M4 vs. 911 GTS drag race we featured recently.

There's no question the Porsche DNA is strong with the turbo, which corners with uncanny precision and feels at home even on the track. The M760Li can't do that, but its M Performance badge has nothing to do with it. The general tuning is geared towards luxury. It has the better interior ambiance and more ample room in the back.

Sure, you're mostly going to be sitting behind the wheel, but do you really want people to feel cramped in the back of your expensive new German saloon?

Mostly, we're sharing this comparison from Autocar for the numbers at the end of the drag race. 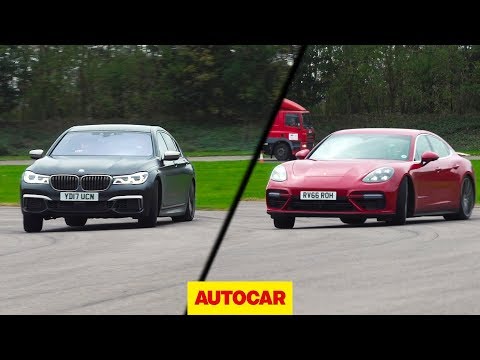