Usually, people compare hot hatches with other hot hatches. Back in the day, these models used to come with a front-wheel-drive configuration with a naturally aspirated motor. Those times are long gone, and now all of them have turbocharged engines, and most come with automated gearboxes as standard.
6 photos

With that in mind, would a conventional hot hatch, albeit with a turbocharged motor, have a shot against one with all-wheel drive? But what about against an even more powerful car that has no direct competitor, as is the case with BMW's M240i? The German coupe is a premium model with an RWD-based architecture in a segment that has nothing comparable.

The folks over at Carwow decided to pit the BMW M240i against the Volkswagen Golf R, as both come with all-wheel drive, an automated gearbox, over 320 horsepower, and weigh more than a ton and a half. The BMW is significantly heavier, mind you, with almost 150 kilograms (about 330.69 lb) more than the Golf R, which is, by no means, a lightweight car.

We will not ruin the video for you, and you will just have to watch it yourself. We will, however, comment on the “soundcheck” part of the video, which pits the unusually silent Type R against the Golf R and the M240i. It is clear that the Japanese hatchback could have done better here, but that was not a secret at all.

The German coupe also misses out on the practical factor as it does not have four doors or a large trunk opening, as do the Civic Type R and the Golf R. If you care about the practical aspects of vehicle ownership, it might not be the best match for you.

Out of the trio, we are sure everyone has a favorite, especially since the vehicles are different in configuration and character. Some people would never choose a Golf R over a BMW M240i, while others would be die-hard manual enthusiasts and stick with the manual-only Type R.

At the end of the day, it is not just about what car is the fastest of the trio, as many other aspects of car ownership need to be considered. Depreciation is one of them, and maintenance costs are another.

In the case of hot hatches, the level of joy that the vehicle brings to its owner has massive importance, but that cannot be quantified in figures, can it? 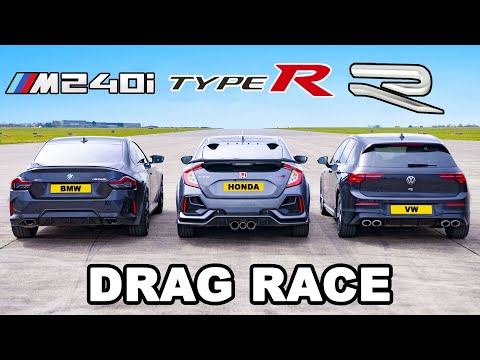