This drag race features two non-German premium sedans, the new 2022 Genesis G70 3.3T and Infiniti's Q50 Red Sport. Both of them are quite powerful but stop short of competing with top dogs like the BMW M3.
6 photos

It's an interesting shootout, as these cars are rarely raced, and most premium buyers will be curious. Sure, they offer a lot on paper and don't cost as much as European rivals. But are you really getting a good deal out of them?

Our expectations were pretty high when it came to the updated 2022 Genesis G70 before it came out. Rumors talked about a new V6, but the 3.3-liter twin-turbo carries over from the previous model year, bringing 368 horsepower along the way. It's a decent number, but the sedan doesn't want to launch well, even with AWD fitted.

In fact, many Korean cars have fallen short in recent drag races, especially the ones with FWD and that new 2.5-liter turbo. But the G70 is quite cool-looking. The combination of split headlights and bold grille openings is unique.

The Infiniti Q50 is... well, it doesn't look as new. Rumor has it that the Skyline model sold in Japan, which is the same car, will be discontinued soon due to slow sales. In America, this competitive but not very profitable segment also includes the BMW M340i, Kia Stinger GT, Acura TLX Type S, Audi S4, and Lexus IS 350 F-Sport.

Regardless, we did expect the Q50 Red Sport to win quite easily, mainly due to its engine. It's some of Nissan's best work, a twin-turbo 3.0-liter making 400 horsepower at 6,400 rpm. If you wanted real muscle in an unassuming sedan shape, this should be near the top of your list. Best of all, the VR30DDTT wasn't matched to a CVT, but rather a 7-speed auto and AWD.

But the actual drag races posted by Canadian YouTuber Sam CarLegion were surprisingly close. The first two are done in Normal Mode and put the Genesis G70 ahead. But in Sport Mode, the Infiniti Q50 wins two races. Four more races follow, and the two "imports" switch positions all the time. So there isn't much to separate them, which isn't a bad result for the Japanese model, considering it's so old. 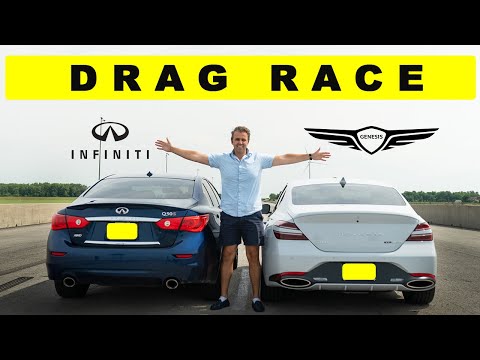