The road to a premium SUV was not easy for the Infiniti, even if Nissan had a big experience in that area.

But it had for the true-blood off-road vehicles.

The 2018 QX50 evolved from the former EX model into a different kind of luxurious crossover vehicle with a stylish interior, a premium exterior look, and a cutting-edge engine technology.

The large grille with a 3D effect was aerodynamically shaped to lower the drag-resistance. The small roof-spoiler was installed to adjust the air-flow behind the vehicle. The new headlights were equipped with an i-LED technology that could direct the light beam according to the driving direction. On the rear of the vehicle, the LED taillights were completing the light-package for the car. New light-alloy wheels design were installed

Inside the vehicle, there was a hand-crafted interior with leather seats and expensive materials used on the dashboard, door panels, and center console. The diamond-stitches on the seats gave the vehicle an exquisite look. For the infotainment system, there were two displays. The one on top of the dashboard was mainly used for the navigation, while the other, that was placed on the center console, was mainly for applications and music. Unfortunately, it didn't support Apple CarPlay or Android Auto at the time of the vehicle's launch.

For the technical part, it was a real revolution with its incredible VC-Turbo engine. The VC stood for "Variable Compression". It was a respectable achievement for the Nissan development team. That allowed the car to change from a lean compression to a higher one, in favor of fuel-efficiency. The gearbox was CVT-type. The QX50 was available as an FWD and as well as an all-wheel-drive. 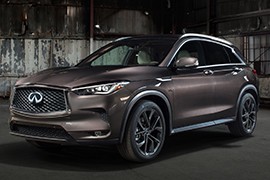