2 2019 Mercedes GLE-Class Winking at Us With Production Headlights

It's the sultan of swag, the magic carpet of automobiles. The all-new 2021 Mercedes S-Class is showing yet more features in this latest spy video.
4 photos

While sales have been steadily declining from the high of almost 20 years ago, the S-Class is still widely seen as a crucial luxury flagship, with technologies that other Mercedes models, as well as the rivals, need to take seriously.

This prototype appears to have a swanky new equipment line, with subtly sporty front intakes and an imposing grille. Also, the whole roof is now uncamouflaged, allowing us to make out its long, flowing shape. You could probably have a whole smart car nestling inside that thing, or shoot a Miley Cyrus video... your choice.

Even though the video is quite short, you can still barely make out the rattle of the engine over the sound of traffic. We think this is a diesel, perhaps even of the four-cylinder car, and right off the bat, people are going to take issue with that.

Honestly, we want to report that a 2-liter oil-burner is enough and that other automakers are focusing heavily on this setup, like Volvo or even Land Rover. However, you have to remember that at about 5.3 meters long and burdened with heavy toys, this is a limo in the truest sense.

On the plus side, some versions of the 2021 S-Class will be able to power themselves completely silently, for up to around 60 miles if the rumors are correct. And more powerful versions will still be available, including V8s like the S 580 or the S63.

The same 48-volt architecture that makes most S-Class models into mild-hybrids will also be used by a variety of other systems. Previous reports saw the car offering up rear-wheel steering and a fresh take on Magic Body. Also, the fact that this has probably the most advanced autonomous driving system ever developed in Europe cannot be ignored. 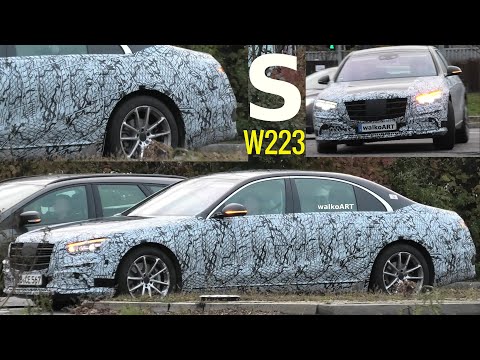