In America, the BMW M3 somewhat competes with the RS5 Sportback. But Audi also makes the legendary RS4 Avant, which is more of a European thing. Here's how that German-on-German rivalry plays out when also taking into account the Bavarian's Competition package.
7 photos

We've already got a pretty good idea of how these compare dynamically. Throttle House did a drag race with the RS5 Coupe and the M4 while also getting the C63 involved. The quattro AWD helped Audi murder the competition, but everybody suspects things will change this summer once the new M3 and M4 get xDrive.

The video shot by Carwow is more of a comparison review, a nice way to check out all the features these two German cars offer in terms of luxury or performance. And straight away, we learn a surprising little fact: the M3 is much more expensive than the RS4. It's mostly due to the Competition model with 503 horsepower being the standard version in the UK.

On the other hand, the RS4 is noticeably down on power at 444 hp. The comparison points out how the M4 has bigger brakes and standard adaptive dampers, which are also hard to get on the RS4. These things matter for German cars, which need to be all-singing, all-dancing.

So what about pure performance? Well, we've already told you how the RS4 boasts about 60 fewer ponies. Both have 8-speed gearboxes, but the M3 can still struggle for traction. You probably expect us to say the M3 is slower, but we're not going to do that because Carwow's timing gear shows the BMW did the 1/4-mile in 11.60 seconds versus 11.72 seconds in the Audi.

Now, this isn't a pure drag race, just individual timed runs. We could be dealing with a better tire on this UK test car than in the Canadian race because the 0 to 60 mph (96 kph) time was really good. In any case, the M3 has a lot of power and is undoubtedly faster than ever. But will people be put off by its styling? 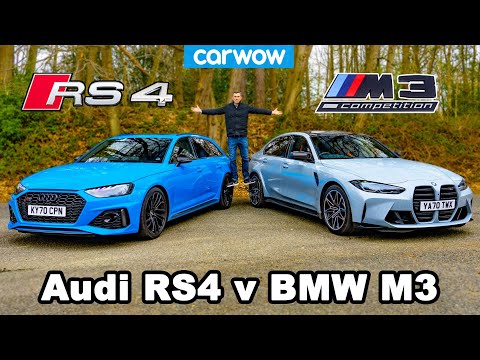