5 Mercedes GLE SUV Will Debut In New York, Could Spawn 63 AMG and 450 AMG Versions
Car video reviews:
Up Next

2020 Mercedes GLE Coupe Is Getting Ready for the Big Fight, Spied at the Nurburg

It's about to go down between the big luxury SUV brands. Audi improved the Q7/Q8, BMW just came out with a flashy grille on its new X6 and Mercedes will retaliate with this, the GLE Coupe, seen here undergoing more track testing at the Nurburgring.
3 photos

We've been talking about this car since last year and hope the Mercedes designers have done a better job than with the normal GLE-Class. One thing's for sure, the amount of toys that you can have is going to be unprecedented.

The first GLE felt like it happened by accident. Mercedes facelifted the old ML-Class, and when the Coupe model was developed, it came out looking bloated and ugly. This is obviously an improvement, with a longer roof, stronger shoulders and an imposing fascia. But we still can't help feel the Audi Q8 and Range Rover Velar are more appealing.

Engine-wise, you'll see a wider variety of setups. Mercedes has developed an inline-6 3-liter, which will be the bulk of the range. It's available in diesel forms with up to 340 HP and as a hybrid AMG, the GLE 53 Coupe which will replace the old V6-powered 43 AMG, adding a bit more power, but also cost and weight.

We think this prototype is the GLE 450 AMG Line, with 367 HP and a body kit that includes a rear diffuser. V8 will still be available as well, mainly the GLE 580 and the 63 twin models from AMG. In fact, this spy video even has glimpses of the GLE 63 S Coupe, as it bombards the Nurburgring with Messerschmidt fighter sounds. However, this probably won't come out at the same time as the regular models.

This should also be the first GLE Coupe model capable of running purely on electricity, and 2-lite base engines should offer something for the budget-minded. 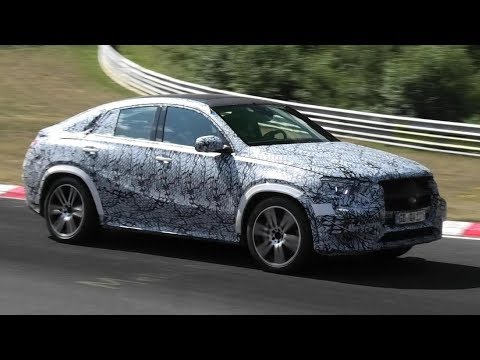