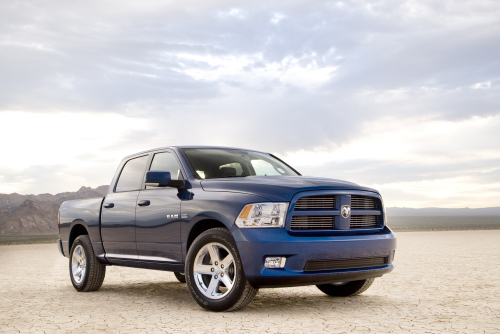 Both remaining versions of the 2009 Dodge Ram (Regular Cab and Quad Cab) received a five star rating for driver and front passenger protection in US government crash tests, after the Crew Cab version did the same thing earlier this year.

The 2009 Dodge Ram is packed with both passive and active safety features. In all, some 35 systems help or try to make the vehicle as safe as it can get. Setting aside the familiar airbags, ABS or belt alert, the 2009 Ram has so many safety gadgetry you might think they over done it a bit.

Features such brake assist, crumple zones or energy absorbing steering column are meant to both prevent and help occupants survive the crash. But as accidents will still happen, Chrysler decided to emphasize in the 2009 Ram that not only surviving a crash is crucial, but also the minutes that follow.

2009 Dodge Ram uses Enhanced Accident Response (EARS), a system which, when detecting airbag deployment shuts down fuel flow to the engine, unlocks the doors and turns on the interior light, so that rescuers can see the occupants inside.

As we previously reported, the 2009 Ram features a cargo management system called RamBox, made up of a weatherproof storage bins, pickup bed dividers, a two-foot bed extender and a cargo rail system with sliding adjustable cleats. In the event of a person getting trapped inside, the RamBox features a glow-in-the-dark release handle.

"Safety is an engineering priority in all Chrysler vehicles and the all-new 2009 Dodge Ram is proof of our efforts. The all-new Dodge Ram offers enhanced passive safety protection as well as the latest active safety technologies. We have integrated more than 35 safety and security features, instilling the confidence our customers want and expect," Scott Kunselman, Chrysler Body on Frame Product Team, vice president said in a release.