The JDM imports are more popular than ever, with the Toyota HiAce vans seeing a lot of interest from prospective buyers. This 1996 Super Custom example on Bring a Trailer is in mint condition. It comes with trusted off-road credentials and a legendary diesel engine.
13 photos

If the 1KZ engine doesn’t ring a bell, it’s enough to say that it’s one of the most appreciated engines built by Toyota. It served under the hood of the unbreakable Toyota Hilux but also in the Prado, so you won’t have problems finding spare parts when you need them. This trusted 3.0-liter diesel powerplant goes great with the 4WD transmission, making the HiAce the perfect base for an overland camper.

Of course, being imported from Japan, it’s a right-hand drive example, so it needs some time to get used to it before setting up on a trip. Overtaking other vehicles on a two-lane road would be difficult without the help of a co-driver. Another problem is the sliding side door, which opens on the wrong side, that is, toward traffic. We’re not sure whether converting these vehicles to left-hand drive is worth it. Still, they can be pretty valuable in many situations.

The diesel engine in this Toyota is very economical, and you won’t have problems with the van for many years. Sleeping inside would not be a problem, as they are usually very versatile. With a bit of skill, you can convert it into a proper camper by installing a folding bed and a kitchenette. Even a slide-out camper box would do miracles with little effort and money. At the end of the day, you’d have a camper van able to climb almost anywhere.

This HiAce was imported from Japan before the selling dealer’s acquisition in June 2022. It comes with a three-row configuration, qualifying as a people carrier. It has air conditioning up front and in the rear cabin, which is also equipped with a heater. The HiAce is offered on Bring a Trailer, with the highest bid at $7,069. This is usually the average selling price for this type of van, but we’ll see how the auction ends in two days. 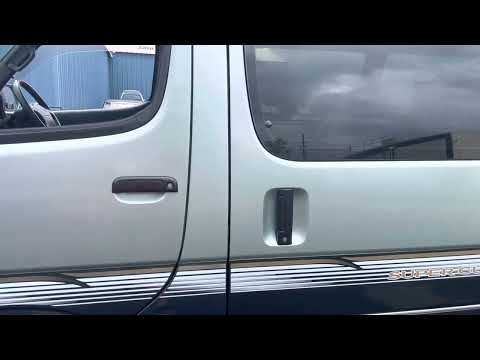