3 Bizzare Modified Suzuki Every Van Evokes an Old VW Bus on Acid, It's Also for Sale

5 JDM 4x4 Van Test - as Shakespeare Put It, "4WD Alone Does Not an Off Roader Make"
Car video reviews:
Up Next

Japanese minivans of the nineties are in their own league, with their 4x4 drivetrains and legendary durability. The Mitsubishi Delica Star Wagon is a prime example and this one we’ve found on Bring a Trailer comes with a suspension lift and 32-inch tires to tackle any road and no road alike.
19 photos

The third generation of the Mitsubishi Delica was no ordinary minivan and it got a good off-road reputation thanks to its Mitsubishi Pajero mechanical platform. Even though the Delica was officially imported into the U.S. between 1987 and 1990, it was only available with a gas engine and rear-wheel drive. What people wanted (and got years later as JDM import) was the diesel version with 4WD.

The 1989 Mitsubishi Delica Star Wagon we’ve found on Bring a Trailer comes with all the bells and whistles of a proper off-roader, down to the dual-range transfer case. The 2.5-liter turbodiesel inline-four engine only pumps 86 horsepower, but the 148 ft-lb (201 Nm) torque is more important when it comes to off-roading. Speaking of which, this Delica must have been lifted to make way for the 32-inch General Grabber AT2 tires.

With such an off-road pedigree, the Delica is the best base vehicle for a camper conversion that can go anywhere. Our example already comes with the basics, as it features a pop-top roof and comes with a slide-out camper grill at the back. The rear passenger cabin is equipped with heat and air conditioning controls and offers seating for eight on the three rows of seats. The second and third rows fold flat into a sleeping area, but we reckon there is a lot more to work on to make this JDM into a proper camper.

If you’re curious about what you can do with a 4x4 JDM van, check out this great DIY build where Nat from Element Van Life turned a Toyota Hiace into a very competent camper. These JDM vans are great, offering a lot of space in the cabin and being very reliable. As for the Delica, you can find it on Bring a Trailer with the highest bid of $14,000 at the time of writing, with only one day left to bid. 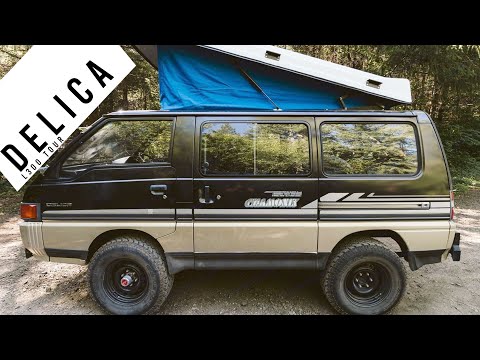