5 2016 Harley-Davidson Street 750 Indie Is a Custom Cafe Racer Played by Ear
Car video reviews:
Up Next

Given how the health crisis has put an end to all types of auto and moto shows around the world – except for the Sturgis motorcycle rally, for some reason – companies had to find alternatives ways to keep the hype up. For Harley and the Harley custom bike community, that meant the launch in June of The No Show, a Youtube-based series depicting some of the builds we should have seen at various shows across the country this year.
20 photos

The series gave the opportunity to some 60 builders from 10 countries to show their creations online, and the 1946 Knucklehead King Nothing Bobber is one of them.

The bike was put together by Josh Allison, one of the lead fabricators and shop manager for one of the world’s best known custom garages, Orange County Choppers, and came to be as the results of the man’s fascination with Harley’s knucklehead engines.

The idea behind the build was to keep everything original, and that meant looking for just the right parts. Despite his connections and involvement with the industry, it took Allison about three months to come up with the right parts, including a 1946 knuckle motor that needed a complete rebuild, and the 1945 frame inside which it was finally placed.

Allison says the end product contains only original parts, but the man’s touch can cleary be seen on the build.

Sporting a bare-metal, patina-sprinkled look, the King Nothing Bobber – that’s the name Allison gave to the bike – has its share of unique cues, including (or especially) the fuel tank and the metal seat. Both have been incredibly difficult to make as per Allison’s own admission, but the end result is definitely worth it.

The OCC man says the final goal was to create a “bike that you would just find in a garage or some shop like hidden in the back under a tarp,” and by the looks of it, he nailed it. 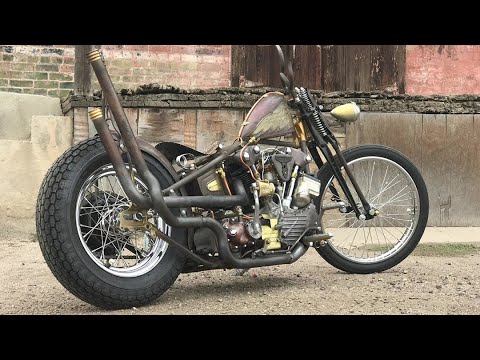