Wiesmann produced vehicles for those with deep pockets who could appreciate a bespoke sports car built on their taste, and then the German carmaker offered it as a roadster.

When a big carmaker wants to build a special roadster, the engineering team will have an army of accountants behind them who will scream that they will not approve an unusual project. But there are a few car manufacturers who could do that. Wiesmann was one of them.

Dressed like an old British roadster, the MF5 was packed with new technologies. The rounded shapes of the bodywork and ample front wheel fenders are part of the retro-style design. Its round headlights with clear lenses are far better than the '60s best headlights. As for the bumper, well, there is none of that. The crash-protective elements are well hidden behind the front fascia. The purity of a roadster consisted of a minimalist design, and Wiesmann designers were good at that. In the back, behind the exposed retractable roof-top, the carmaker installed six LED taillights grouped by three, flanking the trunk. Also, no bumper here, but the protection element could have been seen behind the license plate support, above the two exhausts.

The interior was manually crafted, and there was even an iPhone connection cable in the armrest. There was only a small cluster in front of the driver, where the car showed the gear and a few lights. The speedometer and other gauges found their place on the center stack, tilted toward the steering wheel.

Under the hood, Wiesmann installed a twin-turbo V-8 engine from BMW. It produced 555 hp, which transformed the beautiful and elegant roadster into a rocket since its weight was just 3,241 lbs (1,470 kg). 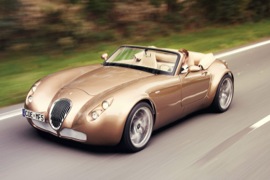 1 Wiesmann Is Considering Expanding Its Lineup with Electric SUV

3 Wiesmann Project Gecko Is a Modern MF5 with BMW M Engine, to Be Revealed in 2020