In the early 2000s, Spyker decided to compete in the famous 24 Hours of Le Mans race in France, so it had to build a vehicle for that.

The race organizers required manufacturers to produce at least 25 units of a vehicle to get the homologation number. Spyker couldn't rely on the regular C8, so it created a road-going monster named C8 Double 12 S, which was the street version of the C8 Double 12 R race car. Moreover, Spyker complained that since it was a small manufacturer, it couldn't provide 25 units, so that number was decreased to 15.

The Dutch manufacturer used the same platform as the C8 but with an extended wheelbase, needed for the high-speed areas of the Mulsanne straight. Yet, the street-legal model was quite stylish, with a glass roof from the C8 Laviolette. Moreover, at the back of the sloped greenhouse, the carmaker added a modified, more extended deck to provide an additional area to increase the aerodynamic efficiency.

But the carmaker didn't have to install the same scarce interior as in a race car. Thus, it fitted the cabin with a leather-wrapped interior complemented by aluminum trims. The four-spoke steering wheel and the polished metallic parts of the gear linkage were also used from other C8 models.

The most intriguing part of the car was in the engine compartment. While the race-going version was fitted with an Audi-sourced 4.2-liter V8, the race car was equipped with a 4.0-liter BMW engine due to race regulations. That led to a more powerful 450 PS (444 hp) C8 Double 12 S than the racing model. But when the race organizers had to check the road-legal vehicle, they were presented with a BMW-powered example, which was the only one produced. The rest of the 14 units were fitted with the Audi engine. 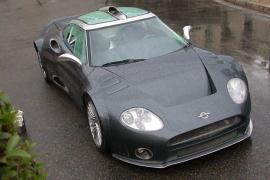