The Altea XL was the extended version of the Spanish MPV Seat Altea, and it was unveiled at the 2006 Paris Motor Show.

Three years later, in 2009, Seat introduced a facelifted version for their 7-seat compact-sized MPV, but the timing couldn't be worse than that due to the world economic crisis that started in 2008. Seat built the Altea XL on the extended version of the PQ35 platform, shared with many other cars in the Volkswagen group.

Adding 18.7 cm (7.4") to the wheelbase didn't destroy the overall design. Au the contrary! Its wave-sculptured body panels seemed smoother and enhanced the look of the vehicle. At the front, it used the same front fascia as the regular Altea, a compact, 5-seat, MPV, and its headlights resembled those installed on the second generation of the Seat Leon. In the back, the facelifted version of the Altea XL featured two big taillights that were extended from the rear quarter panels to the tailgate.

Inside, Seat offered the Altea XL with a 5-seat layout on the base level and up to seven seats as an option or standard for specific trim levels. The CD-radio with Bluetooth connectivity became a standard feature of the car. From the safety point of view, the Altea XL featured standard active headrests for the front seats.

In September 2009, carmakers started introducing the Euro 5 engines, and the Volkswagen group rushed to fill the applications. As a result, the entire engine lineup of the Altea XL was revised and updated. The base version received a 1.2-liter turbocharged engine paired to a 6-speed manual, while the full version received a 170 hp turbodiesel. 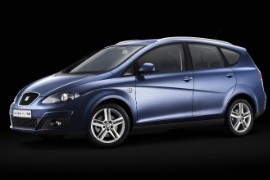