The badge-engineering process crossed the Atlantic many times and the Saturn Aura was a good example.

Most of the car was the same as the European Opel/Vauxhall Vectra.

When it launched the car on the U.S. market, the GM stated that it was influenced by European-style design. It was more than that. The differences consisted of badges and mandatory equipment for the U.S. market.

From the front, the Aura featured the same swept headlights and the turn-signals on top. The big, chromed bar on the grille, the front bumper with the air-scoops looked very similar to the European Vectra. The raked A-pillars and curved greenhouse inspired big confidence that the car will offer a roomy cabin. The rear side of the car was different, with bigger taillights for the Aura.

Inside, the Aura featured a different instrument cluster, with three round dials, binocular style, instead of four dials as its European siblings. The Aura tried to look more luxurious, with a fat gear-selector on the center console. The rear seats offered ample legroom and headroom, and the wood trims on the doors looked more luxurious than on the Vectra.

Under the hood, the Aura was empowered with different engines. It was offered with a choice of four-pot engine and two V6-units. All of them were mated to a 4- or 6-speed automatic. The latter was offered exclusively on the 3.6-liter version. 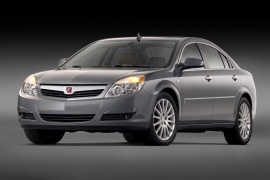