Renault looked to expand its vehicle range and developed the Scenic RX4 as a unique AWD minivan for the European market, together with an off-road specialist company.

While the Scenic was a sales-winner in its MPV segment, the French carmaker was a newbie in the off-road or SUV segment. Apart from some all-wheel-drive vehicles built in the past and the special military trucks, it had no expertise. After joining the Renault-Nissan Alliance, the French carmaker dropped the RX4 from its lineup, helping Nissan sells more X-Trails.

It was a unique vehicle on the market. Even though its overall look resembled the standard Megane Scenic facelift, its bigger bumpers and side moldings showed a different character. At the back, the carmaker installed the spare wheel on the lower side of the tailgate, which was opened sideways, while the rear window had hinges on its upper side. Unlike other SUV makers from those times, it installed a duralumin shield under the engine bay, not a fake plastic one.

Inside, apart from the dashboard, everything was changed. There were plenty of storage areas inside: under the seats, under the bench, under the floor, in the dashboard, and on the door panels. In fact, it had more interior storage volume than a 1959 Mini trunk. Its five individual seats allowed an impressive seat arrangement for its class.

Under the body, Renault installed a choice of two engines and an AWD system developed by Magna-Steyr with an electronically controlled center differential and a limited-slip front differential. 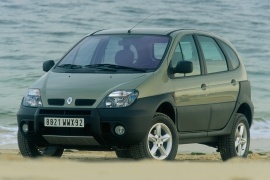