Renault introduced a mid-life cycle refresh for the entire Megane range in 2013 and improved its most potent version, the RS, in the following year.

When Renault introduced the first Megane RS back in back in 2004, it became the benchmark for the hot-hatch industry. It overthrew the standards and overtook its opponents with its turbocharged engine. Its successor appeared in 2010, produced even more power, and kept winning customers for the French brand. But when the carmaker upgraded the rest of the Megane range, the RS version couldn't be left untouched.

There were not too many things to do to the car on the exterior, but the carmaker still found some areas to work on, such as the front Platine Grey F1-type blade. Another notable change for the 2014 model was the complete body-colored bumper, while its predecessor featured a piano-black center. For the daytime running lights, the carmaker installed six LEDs on each side, three more than the 2010 model.

Inside, the carmaker installed Recaro sport bucket seats for the RS Trophy version. Renault used Alcantara for the upholstery, steering wheel, and handbrake below, with red stitching even on the rear bench seat.

Under the hood, Renault offered the RS with a turbocharged 2.0-liter engine that provided 265 hp. A limited-edition Trophy version offered ten more horses, a standard limited-slip differential, and a reinforced chassis. Both versions featured a six-speed manual transmission. 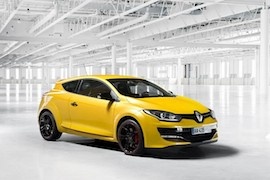