The 2006 version of Renault Megane RS is actually an improved edition of the 2004 model which was already the most powerful Megane ever built.

Obviously, the new RS, which actually stands for Renault Sport, is now able to provide even more power thanks to its upgraded engines. And speaking of engines, the 2006 Megane RS comes with a choice of two engines, a 2.0-liter 16V turbo and a 2.0-liter dCi, producing 225 and 175 horsepower respectively. Similar to the 2004 model, the new series is available in two body styles, 3- and 5-door hatchback, and is equipped with sports suspension and other parts capable of improving the performance of the car. 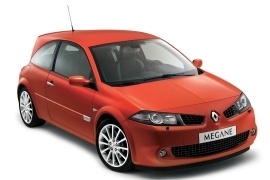