Renault unveiled the third generation of its compact-segment range in late 2008 and, in 2009, it introduced the station-wagon version.

The compact segment was rising again after the world financial crisis, and Renault rushed to offer a complete lineup for the successful Megane nameplate. While some customers were eager to get their hands on the beautiful three-door version, the station-wagon was the choice of families and salesmen across the European continent. It was a decent vehicle, good and practical.

Renault dropped the original idea of a classic station wagon with a wide window behind the rear doors. The overall look was closer to a hatchback with a longer roof. At the front, it used the same front fascia with swept-back headlights on the fenders, and the grille was installed only in the front apron, not above the bumper. From its sides, the turn-signals on the mirrors and the body-colored door handles were fitted as standard.

Inside, Renault installed a curved dashboard covered in a soft material. Its instrument cluster sported a digital speedometer in the middle flanked by an analog tachometer on the left and a smalls LCD for the on-board computer on the right. In the middle of the dash panel, an additional cluster featured an additional display for the audio system, showing the caller-ID information or other relevant data from the radio or the CD-player. The Megane's interior was fit for up to five adults, with two, almost flat, seats at the front and a split-folding bench in the back. The user could have expanded the trunk area from its regular 524 liters (18.5 cu-ft) up to 1,595 liters (56.33 cu-ft).

Renault offered the Megane with up to 14 engine choices, with automatic or CVT transmissions, depending on the market. 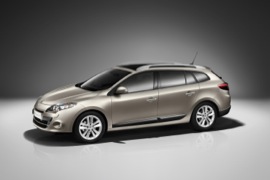