In 2009, Dodge Ram was converted into Ram Trucks as a separate brand for light utility vehicles, and the third generation of the 3500 series became Ram Trucks 3500.

In 2014, Chrysler's light commercial vehicle division, born from the Dodge brand, introduced a facelifted version for the 3500 HD series. It was available in a few cab-styles, including a chassis-cab or as a regular-cab version with a bed in the back and ready to receive a gooseneck. It was the hard-worker of the family, used to carry heavy loads and pull trailers with construction vehicles.

Its exterior look was improved with the introduction of a new pair of headlights and, depending on the trim level, black plastic bumpers. For the better-equipped versions, Ram Trucks offered body-colored bumpers or even chromed metallic ones. The carmaker kept the cross-hair grille design from the rest of the Dodge brand. In the rear, the wide quarter panels were required to fit the dual-wheels system.

Inside, Ram Trucks offered a simple cloth upholstery for the base version. It was fit for regular workers. For those who used the 3500 Regular-cab as a pulling vehicle for a luxurious trailer, the carmaker offered better features such as a 7" infotainment screen on the center stack.

But the powertrain was the most important part of the vehicle. Ram Trucks offered the 3500 Regular cab with a choice of three engines. The gasoline Hemi engines were carried over from the rest of the Ram truck range, while the 6.7-liter Cummins turbodiesel engine was an industrial grade. Truck-builders around the world used the same inline-six for medium-sized commercial vehicles up to 18 tons. 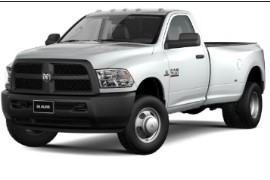