The regular cab was the only one available with an 8 ft bed.

While the Ford F-Series continued its glorious march as the best selling vehicle in the U.S., the other car-manufacturers tried to offer something different, for different tastes. After all, not everybody likes maple syrup.

The RAM 1500 regular cab had a different approach to the market, featuring coil springs in the back, unlike the leaf-spring solution offered by the other manufacturers. The result was a better ride comfort when the vehicle was unladen, and it didn't affect its towing capability.

From the outside, it didn't look too much different than the 2005 model. In that area, things are usually changed slowly and only from inside-out. The Laramie trim level received a chromed grille.

On the inside, for safety reasons, the center console was changed in order to get better results from the overlapping crash-tests performed by IIHS.

The biggest surprises were between the chassis and the bodywork. On the front, there was a new, 3.0-liter turbodiesel engine. Its low-end torque and fuel-efficiency was great competition over Chevrolet or Ford full-size trucks. The 8-speed ZF transmission offered for the 5.7-liter Hemi engine was another important improvement, due to its smooth gear-change. In the back, a new, option for air-suspension was added to the list. 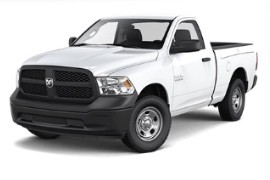 2 Converted ProMaster Van Has a Clever Design, Includes an Elevator Bed and a Hidden Shower