By combining a Porsche Panamera Turbo with the hybrid system already developed for the 4 E-Hybrid, the result was a 680 hp monster which was environmentally friendly.

Porsche was one of the pioneers of hybrid mobility since the Lohner-Porsche model unveiled in 1900 at the Paris Exhibition. More than a century later, the German carmaker chose the same city to show its evolved hybrid vehicle.

The second generation of the Panamera showed up in 2016 and its design fixed all the problems of the first generation. The nice look of a four-door coupe, combined with the exterior details of the vehicle, made it up for those who waited and trusted the Porsche brand. It looked like a stretched 911 model, but with the engine in the front. The 4-LED headlights fitted as standard were one of the key design elements that made the car attractive. As a distinctive detail, the 4 E-Hybrid featured the electric-green brake calipers and the green “hybrid” badges on the fenders and on the trunk lid.

The interior was fitted with a wide 12.3” touch-screen as a central PCM (Porsche Communication Management) unit mounted at the same level as the steering wheel, on the center stack. It was for accessing various information and setting for the hybrid system as well.

The hybrid system deserved most of the attention. It was the first all-wheel-drive Panamera hybrid. It was fitted with a more powerful electric motor and a twin-turbo 4.0-liter V8 gasoline engine. The powerplant was fitted to an 8-speed PDK (dual-clutch) gearbox. Its predecessors were fitted with rear-wheel-drive only. The Panamera 4 E-hybrid always started in electric mode and turned on its gasoline unit later. That helped the car to achieve a 50 km (31 miles) of electric range. Its Li-ion battery pack could store up to 15.1 kWh. 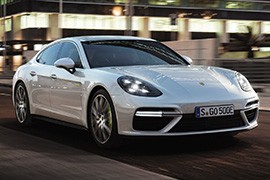