Porsche gave a seventh-anniversary present to the Macan and gave it an improved, more powerful version for the GTS range along with some other visual and technical updates.

While the Porsche purists were outraged by the introduction of the Porsche Cayenne, stating that the carmaker should stick only to sports cars, the customers were thrilled. Eventually, the Cayenne became the biggest money-maker for the German brand. But, soon, the voices of the nay-sayers were turned down again with the addition of the Panamera and, in 2014, by the Macan.

The 2021 model was still based on the same platform as the Audi Q5, but apart from the MLB platform, the GTS was completely different. Its exterior design was improved over the 2016 model year. Its front fascia featured a broad black grille that covered the mid-section of the bumper from side to side. Its LED DRL's underlined the swept-back headlights, which received Porsche Dynamic Light System (PLDS) fitted as standard.

Porsche fitted a new center console inside the Macan GTS, enhanced with touch controls instead of physic buttons and with a shorter gear selector. In addition, the carmaker now installed the analog clock on top of the dashboard as a standard feature.

But the biggest changes were for the drivetrain. The engine received a boost of 60 hp over its predecessor, reaching 440 ponies from the same 2.9-liter turbocharged engine. In addition, Porsche stiffened the Macan's air suspension, and the ground clearance dropped by 10 mm (0.4") when compared to the rest of its siblings. 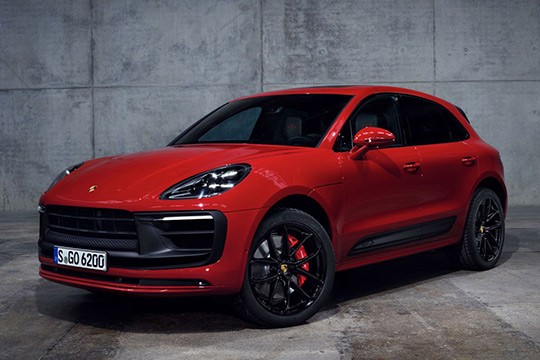