The Porsche had to widen-up its range if it wanted to survive on the market.

After successfully launching the Boxster/Cayman, the Panamera and the Cayenne, a new star was born: the Macan.

A big SUV might come handy when someone would travel on long distances, but as a daily driver in a crowded city that might not be a great solution. It was not only about the running costs, but it was more about parking space. Moreover, a smaller SUV would attract more buyers.

From the outside, it's look reminded of the second generation of the Cayenne, but it was shrunk. The headlights, the doors, and the raked rear end were inspired by its bigger brother.

The interior has room for five, but mostly for four people. The infotainment system can be connected only with Apple CarPlay, but not with Android Auto. The dashboard resembled some of the Porsche models, especially the Cayenne. Despite its short wheelbase, it offered enough legroom for the rear passengers. The seatback was split and folding so it could expand and offer more trunk space.

The Macan featured a 2.0-liter inline-four turbocharged engine delivering 252 hp. It was carried-over from Audi and it offered enough grunt for the lightweight Porsche Suv. The car was fitted with a standard active all-wheel-drive system with an electronically controlled, map-controlled multi-plate clutch. That AWD system was fitted on all Macan models. A seven-speed double-clutch transmission transfers power as required and almost without any interruption in power supply, enabling the vehicle to accelerate from 0 to 100 kph (0-62 mph) in 6.7 seconds. There was no manual version available for the Macan. 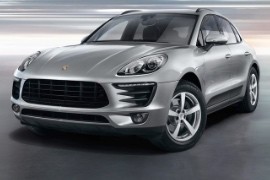 4 Porsche Overhauls Its Car Configurator, You Can Now Order Your Custom Build Online

5 Everrati Porsche 911 Wide Body Cabriolet Is More Than an EV Conversion, Is Reversible