Introduced at the 2021 LA Auto Show, the Taycan GTS version stood between the base and Turbo versions.

Porsche offered the GTS version for many of its vehicles, and the three magic letters stood for Gran Turismo Sport, meaning that those versions were built for long travels and offered both a comfortable ride and plenty of performance. Since the Taycan was an electric vehicle, its range was also crucial. Apart from the under four-second 0-100 kph (0-62 mph) acceleration time, it also provided enough juice in its batteries for over 500 km (310 miles).

On the outside, the GTS featured black accents that made it unmistakable from the rest of the Tyacan range. In addition, its apron, door mirrors, and window trims featured black accents. Black side sills also adorned the lower side of the vehicle, with subtle, chromed GTS badges. At the back, the sloped rear end featured an integrated adjustable wing and the Taycan GTS nameplate underneath the third brake lights.

Inside, Porsche added GTS badges on the Alcantara clad steering wheel and on the front seats' headrests. Its dashboard featured a vast dual-screen system, one for the instrument panel and the other for the infotainment. On the center stack, in an angled position, the carmaker placed another touch panel for the climate control unit.

A standard adaptive air suspension ensured not only a comfortable ride but also enhanced road holding. 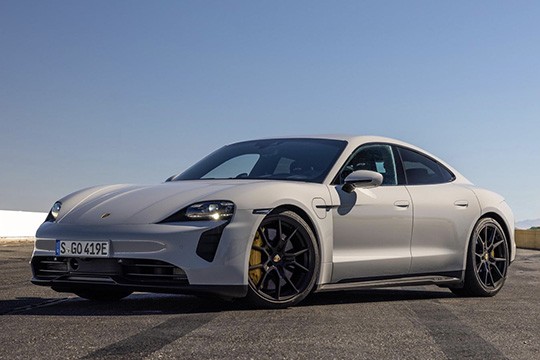