A year after the Cayman S and the second generation of the Boxster were unveiled, Porsche released the non-S version of its mid-engine sport-coupe vehicle.

The Cayman was built to be not only a fast and nimble car but a practical vehicle as well. It featured two luggage areas: one in the front and one behind the engine, with a total storage of 410 l (14.5 cu-ft), which was more than enough for a vacation in two for a week. The car featured round headlights inspired by former glory models such as the Porsche 550 Coupe or the Porsche 904 Coupe. The side air-intakes placed in front of the rear wheels provided air to cool the mid-mounted engine.

Inside, the Cayman S offered room for two passengers. The interior featured most of the parts from the Boxster II, with the same layout for the instrument cluster. The bolstered seats were upholstered in leather and fabric, depending on the option.

For the 2.7-liter flat-six engine, Porsche installed its latest VarioCam Plus management. That ensured higher torque at low-revs, leading to a decent fuel-efficiency for a 245 hp engine. The engine was paired as standard with a 5-speed manual, while a 5-speed automatic (Tiptronic) was on the options list. 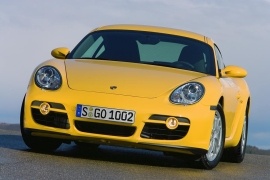