For the German carmaker was another day at the office, but for the enthusiasts, it was another masterpiece for the roads.

Porsche didn't forget its roots and kept the 911 range on the market even though the internal-combustion engines were on the brink of extinction. But the carmaker continued on using its flat-six powerplant. It pleased its customers with a road-legal but a track-ready version of the 992 generation of the 911. It was the most hard-core version of its family.

With a design inspired by race cars, the GT3 RS featured a wild aerodynamic package that began with exhausts on the front hood and fenders. Its front bumper featured a broader grille at the bottom, allowing more cold air into the center-mounted radiator. On the sides, the crease on the front fenders and doors was inspired by the street version of the Porsche 911 GT1 Le Man car. At the back, the swan-type wing adorned the rear end. At the same time, the lower bumper sported a similar diffuser as the regular 911 GT3, with dual exhausts in the middle.

Inside, the standard carbon-fiber bucket seats fitted with race harnesses were standard. Also, the car featured a different steering wheel that allows the driver to make various settings for the car. They could adjust the bound and rebound rates, the eLSD (electronically-control Limited-Slip Differential), and the DRS (drag-reduction system) that lowered the car's aerodynamic drag for higher speeds.

The naturally-aspirated flat-six engine in the back provided 525 hp, which was sent to the rear wheels only via a seven-speed automatic (PDK – double-clutch) transmission. 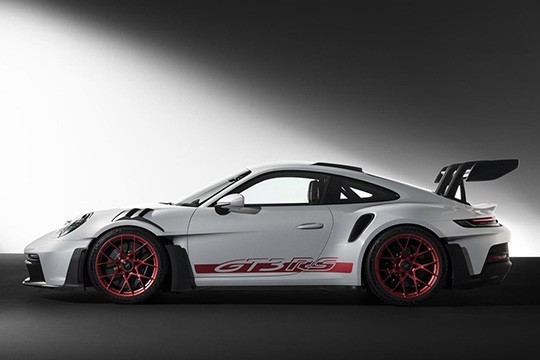