4 Porsche 911 Facelift Gets Spied in Cabriolet and Coupe Forms, Both Share Digital Dash

5 2024 Porsche Taycan Allegedly Has 1,000 Horsepower, Gets Spied During Winter Testing

Porsche brought back the T version of the 911 Carrera in 2023, and it fitted it with all the necessary stuff that made this variant of the famous sports car so appealing.

The Carrera T stood between the basic 911 Carrera and the 911 Carrera S in terms of performance and price. In 1968 Porsche introduced the T version, which stood for "Touring," and it was a homologation special. That means that it was stripped from all unnecessary amenities for a race car, but enough of them to be appealing for regular use on the road.

From the outside, the 911 Carrera T revealed its character through the Dark Grey details applied on the door mirrors' top and bottom. Moreover, there were new door and rear logos. In addition, the windshield featured a grey-tinted upper section. Another specific feature was the five-spoke light-alloy wheels with 20 inches in size for the front axle and 21 inches for the rear. Finally, at the back, the trim strips on the rear grille were finished in Agate Grey, while the tailpipes were high-gloss black.

Inside, the most intriguing detail was the manual gearbox. Porsche also offered an automatic gearbox at no extra cost. However, customers for the T-version were more attracted to this old-school transmission type. Moreover, the car offered room for only two occupants on the standard four-way Sports Seats Plus at the front. There was no bench in the back to save weight. In addition, Porsche put less sound-deadening materials and thinner carpets.

Under the hood, the carmaker placed the same 3.0-liter turbocharged flat-six as in the back tuned for 385 PS (380 HP) as its Carrera sibling, and it was paired with a standard seven-speed manual or the optional eight-speed PDK (dual-clutch) automatic gearbox. Also, the standard PASM suspension and the Chrono package were offered as standard. In addition, customers could opt for a rear-wheel steering system. 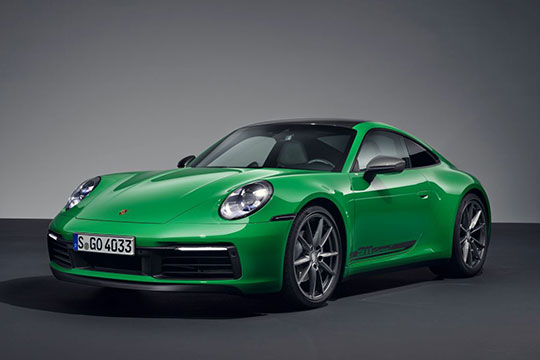