In 2004, Porsche launched a new generation of its well-known Porsche 911. That generation was named 997 and it represented an important upgrade for the whole range, especially after the 2008 facelift.

After four years into production, a mid-life cycle refresh was ready for the market. Porsche had to improve its engines to make them cleaner and to respect the new pollution norms in Europe. It meant that it had to build its cars more fuel-efficient. As usual, the rest of the car suffered some minor changes too.

On the outside, the first difference was on the front bumper, where larger air-intakes were sculptured. The headlights were fitted with LED daytime running lights and an option for bi-xenon lamps was added to the list. The rearview mirrors were slightly redesigned. A new set of 18” light-alloy wheels was fitted as standard for the Carrera. In the rear, the taillights received an LED design.

Inside the car, on the center console, Porsche installed a new infotainment unit that featured a 6.5” touch-screen display. It featured an optional hard-drive navigation system and Bluetooth connectivity. For seats, there were more options than on the non-facelifted version. Besides the standard, manually adjustable, seats, there was an option for 12-way adjustable seats, adaptive sport seats, and new for the 2008 model were the sport-bucket seats. The instrument cluster featured five dials with a black background.

The 3.6-liter engine was enhanced to become more fuel-efficient and offer better performances. It was fitted as standard to a 6-speed manual, while a 6-speed automatic was on the options list. The braking system was enhanced with the introduction of the 318 mm (12.52”) front disc brakes and 299 mm (11.78”) in the rear. 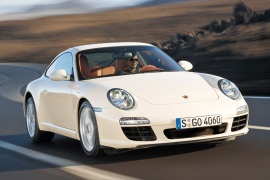