The 997 Carrera made its way back toward the performance factor and lost some of the comfort given by its predecessor, the 996, which was not that much loved by the Porsche fans.

Porsche 911 was one of the most famous sports cars. Its concept of rear-engine and rear-wheel-drive was unique on the market. The biggest change in the car's configuration was when the water-cooled engines replaced the older air-cooled models. The German car-maker unveiled the 997 model at the 2004 Los Angeles Auto Show.

The 997 version kept the 996 shapes but, apart from the roof, all the other body panels were changed. The most obvious difference was at the headlights. While the 996 featured the turn-signals under the same lens with the main lamps, the 997 moved them into the bumper.

Inside, the 2+2 coupe looked similar, but with more differences. There was a new steering wheel, a new infotainment system on the center stack, and new sport-bucket seats. With 6 airbags installed, the 997 generation was safer than its predecessors. The Porsche Communication Management included a DVD-based navigation system and a 9-speaker stereo system, offered as an option or, as a second option, a Bose 13 speaker.

The Carrera 2 featured a 3.6-liter flat-six engine mounted in the rear, same as the 996. It was mated to a new 6-speed manual or a 5-speed automatic. 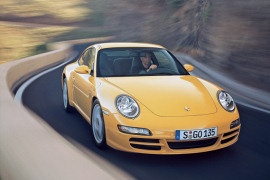