The Porsche's 911 roots started in 1963 and it continuously evolved ever since. It grew in size, engine, and power. It evolved from a sports car to a luxurious super-car. And the 2012 Carrera Coupe was no exception.

The seventh generation of the 911 was launched in 2012 and it sits on a new platform, with a longer wheelbase and shorter overhangs. It also featured new headlights and taillights. The overall shape of the car didn't change that much since 1963 and that is one element why the 911 became an iconic car, same as the VW Beetle and the Land Rover Defender.

The round headlights with the white DRLs strips underneath, installed on the bumper were one key-feature of the 2012 Porsche 911. The three air-scoops in the bumper amplified the sport look of the vehicle. With its rounded greenhouse that was continued by the engine hood in the back, the seventh Porsche 911 kept its original shape. Behind the engine lid there was an active wing that was risen on highway speeds to keep the car better planted on the road. Porsche stated that the wing was tested up to 300 kph (186 mph) and the car had zero lift.

The interior was more about luxury than about performance. The new instrument cluster still had the center tachometer but on its left there was a TFT display installed into the round circle of the former analog gauge.

The 2012 Porsche Carrera featured a 3.4-liter flat-six engine. It was mated as standard to a world's first seven-speed manual transmission. An automatic, PDK (dual-clutch) transmission was offered as an option. 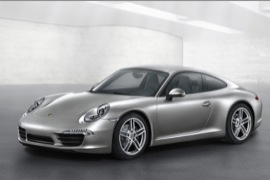