Opel introduced the second generation of the Vectra in 1995 at the Frankfurt Motor Show.

It was one of the most important premieres from that year.

GM placed its bets on the Vectra. After a not very successful first generation, the design department burned the midnight oil to came up with a better-shaped vehicle, and the result was the 1995 Vectra, also known as Vectra B. It was a world car since it was sold under different names and badges. GM used the same platform for the Saturn L-Series, which was not that successful.

The 1995 Vectra was a significant improvement over its predecessor with more rounded areas and fluid shapes. It looked like GM partly agreed with the biodesign trend. A particular form was for the door-mirrors connected to the bodywork via an aerodynamic pillar that followed the hood's V-shaped lines. Its curved lines were extended over the greenhouse and formed an arched shape ended with a third window behind the rear doors.

Inside, the bucket-seats at the front were mounted low on the floor to create the impression of a sporty family sedan. The concept worked well for the front passengers but left little legroom for the rear ones. GM installed a refreshed dashboard with curved lines that looked appealing to its customers. Depending on the trim level, the instrument cluster featured an additional LCD for the on-board computer installed next to the dials.

Under the hood, Opel offered the Vectra B with a choice of five gasoline and a turbodiesel engine. Later on, in 1997, it introduced a new generation of direct-injected diesel versions fitted with four valves per cylinder. The carmaker paired all of them to a five-speed manual gearbox. For selected versions, the Vectra was available with a four-speed automatic transmission. 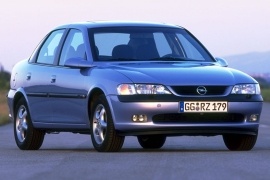