After GM sold its European branch, Opel, to Peugeot-Citroen, the carmaker adapted the German products according to the French technologies.

At the beginning of 2020, Citroen introduced an urban electric vehicle, the Ami. It was designed for commuting inside towns. In 2021, Opel received permission to sell the same vehicle under its badge. The result was named Rocks-e.

When it comes to cost-cutting, the French engineers are experts. They designed the car with the minimum required part. For instance, the front panel and the back panel of the vehicle are using the same molds. The car’s bodywork was made from fiber-glass and plastic, which is easier to build and completely reusable. Moreover, even the doors are using the same stamps. That’s why the one placed next to the sidewalk was rear-hinged.

Inside the four-wheeled umbrella, the carmaker installed two plastic seats, similar to those installed in public transport vehicles. There was only a minimal instrument cluster, which showed the speed and the battery level. On top of the dashboard, in the middle, the carmaker placed a cradle for a mobile phone. Thus, the user could listen to its music on the car's speakers, or follow the navigation app installed on the smartphone.

Since it was a city-commuter vehicle, ideal for ride-sharing or pay-per-use apps, the Rocks-e featured an electric motor and a 5.5 kWh battery pack. The carmaker considered that its 75 km (46 miles) range was enough for the vehicle, and the battery pack could have been charged from zero to 100% in 3.5 hours at any standard household socket. 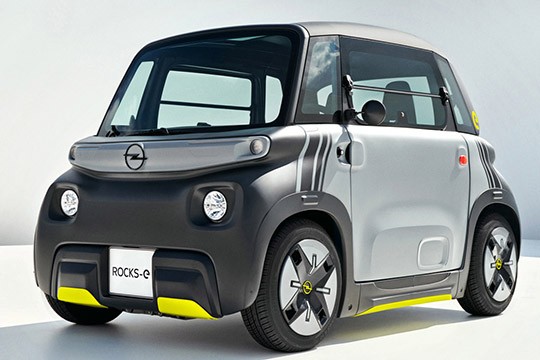