Follower of the Kadett, the 3-door Opel Astra compact has created a legend around it with over 4 million units having been sold between 1991 and 1998.

Equipped with engines ranging in capacity from 1.4 to 2.0-liter gasoline, the Astra was a huge success thanks to its improvements over the Kadett heritage, utility and new styling. The car became increasingly known during the mid 90's, having been introduced in South Africa, New Zealand, Australia and UK where it made quite an impact. In fact, the little Astra won the South African "Car of the Year" award two times in a row, from 1993 to 1994. 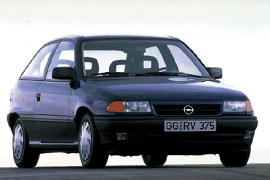