The Lamborghini Aventador SVJ was showed at the 2018 Monterey Car Week in California and with its limited 900 units production, it will be a collectible vehicle.

But a very fast one.

The name stood for Super Veloce Jota, which can be translated in Super-fast Jota. The Jota suffix denoted the track-oriented vehicle. But it wasn't just a name. The anti-roll bar stiffness has been improved by 50% compared to the Aventador SV, which was already a Super-fast version of the already fast Aventador. The 7-speed dual-clutch gearbox was retuned for the increased power and torque and the all-wheel-drive system had improved torque split to maximize traction and handling.

The Aventador was not a new vehicle in 2018, but still a respectable car in the fast car world. The limited-edition SVJ took the car to a different level after it broke the Nurburgring lap record for a series production vehicle. Its 6:44.97 minutes time was hard to beat by anyone. In order to achieve that time, the vehicle featured numerous updates.

One of them was the ALA system, which stands for Aerodinamica Lamborghini Attiva. An advanced active aerodynamic system that opened and closed various flaps and wings depending on the driving speed and conditions. Some were meant for increase speed, some for downforce. The front bumper was wider and included side fins and new intakes.

Another special edition, named SVJ 63 played homage to the foundation of the Lamborghini company, in 1963. It had extensive use of carbon-fiber and it was built in a limited number of 63 units. 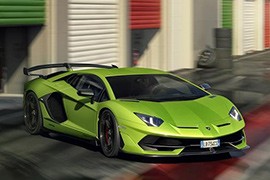