Lamborghini unleashed its creative power and introduced the Aventador in 2011, sending the decade-old Murcielago to a well-deserved retirement.

It was a new chapter from the book of Lamborghini's creations opened for the first time in 1966 by the Miura, the first V-12, mid-engined vehicle. The car defined all the supercars that followed and introduced the standard for all the high-performance sports cars that followed, either produced by Ferrari, McLaren, Spyker, or Koenigsegg, to name just a few. The only exception was the Porsche 911, but its sibling, the GT1, had the engine placed between the rear axle and the cockpit. After the Miura, the Countach, the Diablo, and the Murcielago raised the bar for everyone. And then, in 2011, from the gates of Lamborghini's factory from Sant'Agata Bolognese came the Aventador.

The F-117 Stealth Fighter-jet inspired its look. The wedged-shaped supercar featured Y-shaped daytime running lights, and a V-shaped front side pointed toward the road. Its wide, hexagonal air intakes from the bumper resembled those from a fighter jet. From its sides, the very raked windshield left very little headroom inside. The carmaker made two bubbles on the roof for the driver and passenger. The angular shapes continued on the engine lid, which featured a transparent polycarbonate cover above the V-12 mill.

Filippo Perini, the original project designer, was inspired by military aviation when he made the interior. All buttons and switches looked military-grade, and he didn't use any plastic parts for them. Moreover, the start button was covered by a flip-up red cap, similar to those that prevented accidental launches of a rocket because that was the Aventador, a ground-to-ground wheeled missile.

Behind the cabin, Lamborghini installed a newly developed 6.5-liter engine naturally aspirated that provided 690 hp to a seven-speed automatic (single-clutch) gearbox developed by Graziano Transmissioni. Its push-road independent suspension in all corners helped the car to stay on the road during high-speed cornering. And if that wasn't enough, an adaptive aerodynamic system increased the downforce. 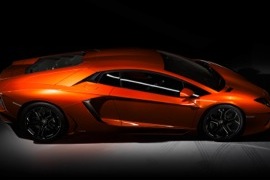