Isuzu tried to enter the market with an SUV developed together with GM and Honda, and it introduced a 3-version of its Trooper model in 1991 and upgraded it in 1998.

By the time Opel launched the Monterey, GM already had over 32 percent of the Isuzu's stakes. Both companies agreed that since the Japanese brand was almost unknown in Europe, Opel should take the badge and sell the Trooper. But somewhere on the road, they changed their minds again and allowed some Isuzu-badged vehicles to be sold on the European market. Apart from the five-door model, the Japanese carmaker offered a three-door version as well. But basically, it was a car built to beat Land Rover at its own game.

Unlike the Discovery, which was already a well-known product built by a renowned off-road carmaker, the Trooper was less known on the market. Its soft lines might have looked better for those trying to find a vehicle for their families. For the 1998 model, Isuzu tried a new front fascia with a chromed horizontal slat across the grille, new bumpers, and new headlights.

Inside, it was a vehicle well equipped. It featured all the comfort features such as air-conditioning, power mirrors, windows, and sunroof. Even though the three-door version had a shorter wheelbase, there was still plenty of room for three in the back and a large trunk good to carry all the needs for a weekend in the woods.

Under the hood, Isuzu installed a 3.5-liter V-6 engine built by Honda and, for selected markets, it introduced the 3.0-liter turbo-diesel unit. 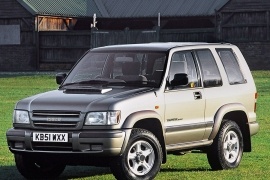