Isuzu launched the MU-7 in 2004 and made a good impression on the market since it built it on the same base as the trustworthy D-Max.

While building an SUV from scratch might be a financial struggle for some carmakers, Isuzu took the same shortcut taken by Mitsubishi when it produced the Pajero/Montero Sport or the Toyota with the Fortuner. Even though it lacked these two Japanese carmakers' experience in building attractive SUVs, it was already known for its reliable vehicles.
The MU-7 lines left no doubt about its links with the D-Max pickup. It featured the same lines, and the new grille that resembled a set of teeth and the reshaped bumper couldn't make a big difference. While the car looked similar up to the rear doors, the rest of it was different. The extended roof featured two raised exterior rails, and the C-pillars were slimmer. A third, curved and sloped down additional window filled the space between the rear doors and the D-pillar. In the back, Isuzu designed a tailgate and included a set of taillights mounted on the quarter panels only.

Inside, the carmaker took advantage of the big wheelbase and installed three seat rows good for up to seven passengers. It offered the MU-7 in a few trim levels, with the top version featuring leather seats and an advanced infotainment system with a color LCD on the center stack and an additional screen on the ceiling, for the rear passengers.

The drivetrain was the same as the one installed in the D-Max, with a 3.0-liter turbo-diesel. It was available with a rear or 4x4 wheel-drive system, with a manual or an automatic gearbox. The 4WD models featured a transfer case with low-range gear. 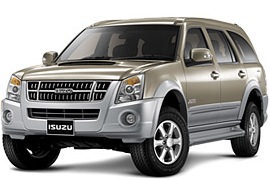