Isuzu tried to increase its presence on the U.S. market with a Chevrolet-based pickup named Hombre but with different styling.

The Japanese carmaker knew that it would need a bigger dealer network if it wants to succeed on U.S. soil and tried various badge-engineering products. Its choice was to make a partnership with GM. Both vehicles used the same assembly line but with two trim options and aesthetic differences.

Isuzu used its specific gate-like grille with three vertical and one horizontal slat instead of the Chevrolet one with the bow-tie badge. The headlights were similar to those installed on the Brazilian market S10 pickup. Finally, the plastic wrap-around front bumper had a different styling with a wide trapezoidal molding at the bottom. The Hombre featured an additional storage area behind the seats and narrow side windows between the doors and the C-pillars on the crew-cab version.

Inside, the Hombre kept the same interior as the S10, but it was available only in base trim levels with cloth upholstery. The radio, the air-conditioning, and the power-windows were on the options list. It was just a plain and simple workhorse. In 1998, the Hombre went through a mild facelift that brought a CD-stereo instead of a tape player.

Isuzu chose two Chevrolet engines to power its pickup: an inline-four and a V-6, both paired to a 5-speed manual transmission. A 4-speed automatic was available as an option. 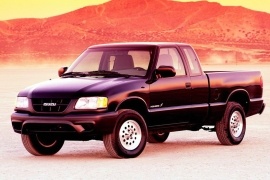