Engineered for the most difficult terrains in the world, the Isuzu D-Max (Rodeo) Arctic Truck AT35 was a technical showcase about the possibilities of the well-known Japanese pickup.

The D-Max was considered a true workhorse, with some comfort features for its occupants. The trustworthy 2.5-liter turbodiesel engine was one of the most fuel-efficient powerplants in its class and that was no wonder since Isuzu is the biggest diesel-engine manufacturer in the world. Arctic Trucks was an international company based in Iceland specialized in re-engineering four-wheel-drive vehicles for harsh terrain. It used to modify the Toyota HiLux for the Arctic expeditions and it teamed-up with Isuzu in developing the D-Max.

The general shape of the body was kept, but the overfenders and big bumpers were from the Icelandic specialists. The car was fitted with 35” tires on 10x17” alloy wheels. The car featured an onboard inflation kit, which allowed the inflation or deflation of the tires. To make room for the massive wheels, FOX suspension installed new coils and dampers for both axles. The D-Max Arctic Truck was available as a single or double-cab, but with the same wheelbase.

The chassis was reinforced with additional braces for more torsional rigidity. The front independent suspension and the rear axle helped the driver maintain full control of the vehicle on slopes or bumpy terrain. Under the hood, there was the same 2.5-liter turbodiesel as the standard D-Max. It was mated to either a 6-speed manual or to an optional 5-speed automatic with sequential control. Due to intensive modifications, the D-Max Arctic Truck AT35 didn't feature a hill descent control, but the engine braking combined with a low-range gear and big tires made that system irrelevant. 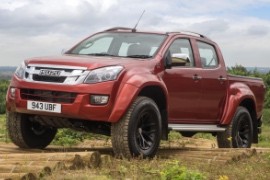