Reaching its 2nd generation, the new Hummer H2 still turned heads on the street, as well as still offering the unique and unstoppable off-road capabilities.

The H2 was available with a single body style and one trim level, however lots of features and two packages could be added.

The standard features included a dual-zone climate control, an OnStar system and a keyless entry system.
One of the packages offered was the Adventure that added self-leveling rear air suspension, a better audio system and a front brush guard.

The H2 was fitted with a more sophisticated 4WD system than the one mounted on the Chevy trucks (like the Tahoe) and a better ABS system. Class-leading in its segment, the H2 outclimed its rivals with the shorter front overhang and the 47 degree approach angle.

Even if the new Hummer H2 was designed to be taken on daily driving, it was not the most pleasant car to drive within the city or on the motorway. 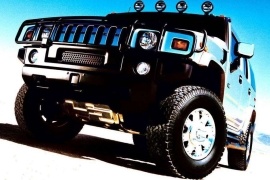