Genesis opened a new chapter in its history with the introduction of the GV70, a vehicle that will compete against BMW X3, Audi Q5, and other premium vehicles in the SUV-compact segment.

Hyundai was relentless and hit the premium market with its up-scale brand Genesis. Even though it wasn't completely successful with all of its lineups, it still going strong against the big premium car-makers.

The GV70 was based on a rear-wheel-drive platform, most probably carried-over from the G70 sedan. With a breathtaking design, the GV70 doesn't resemble any other car on the market. It also came with very fresh ideas, such as the light-alloy-wheels pattern, which looked dimpled like a golf-ball.

At the front, the GV70 featured a complicated, five-sided grille that looked like chainmail. From the sides, the designers took a different approach with different lines and curved surfaces. Some might say that it's the idea of "flame surfacing" imagined by Chris Bangle two decades ago. The hatchback-style rear end with a curved tailgate and D-pillar emphasized the GV70's sporty look.
On top of that, a big roof-spoiler completed the image. In the back, there were two versions for the exhausts. One was with two round pipes, and the other was with two vertical ones with a flat pentagonal shape.

The interior followed an elliptic theme design repeated on the dashboard panel, doors, and glove compartment latch. Since it was a car designed for the connectivity age, the designers installed a widescreen for the infotainment system, Android Auto and Apple CarPlay compatible. The luxurious cabin offered a similar room as in the G70 sedan, but with more legroom and higher seating position. 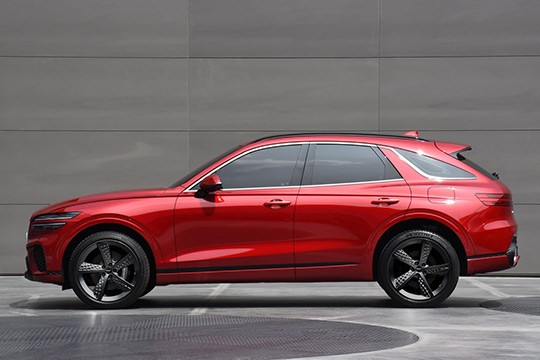