Introduced at the 2019 Los Angeles Auto Show, the Genesis G90 is the carmaker's flagship luxury sedan, set to take on established rivals like the Mercedes-Benz S-Class, BMW 7 Series or the Lexus LS.

Essentially just a facelift of its predecessor and not a new model developed from the ground up, the car features a brand new design language that is an abrupt departure from the previous G90. Soon to be found on other models from the Genesis family, the new design language is called Athletic Elegance and Horizontal Architecture.

Unlike your average mid-cycle facelift, the revamped G90 has an almost 100 percent new exterior, with every single body panel having been replaced, save for the doors and the roof. The front end is dominated by a gargantuan engine grille, called the Crest Grill in Genesis-speak, which is accompanied on each side by two horizontal LED headlights that are split in half. The Quad Lamp look is evoked in the rear as well, with the lower half of split taillights wrapping around the entire rear end. The interior has also been redesigned and is infused with technology, with the revamped G90 being the first ever Genesis to offer over-the-air wireless updates for its navigation and infotainment system. 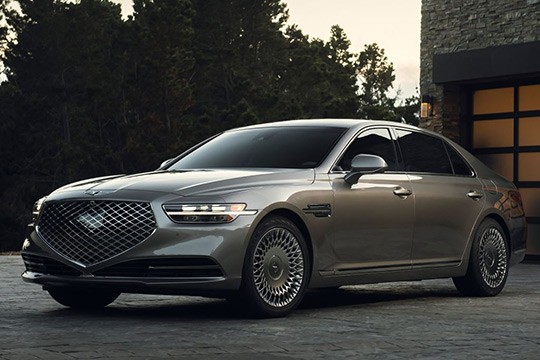