Hyundai had an ambitious plan to enter the premium car segment with the Genesis brand and made its first step on the European market with the G70 Shooting-brake.

The idea of a premium brand was not new for the Korean brand. While the first production vehicle that sported this brand was introduced in 2008 as an upmarket model for Hyundai, the real change was in 2015 when the carmaker launched the G90 wearing the Genesis Motor badge. In 2021 the carmaker introduced the station-wagon-shaped version named G70 Shooting-brake. A car that left the U.S. customers with tears in their eyes since it wasn't available in North America.

Peter Schreyer was responsible for the G70's design, and he also penned the lines of the Shooting-brake version. He was inspired by former European carmakers who used the same bodywork concept: a station wagon with a raked-forward tailgate. The car's front featured the same diamond-shaped broad grille and the swept-back headlights extended over the front fenders. Up to the B-pillar, it was the same G70 but changed behind that. Schreyer extended the car's roof up to the rear wheels, and then it added a sloped-down tailgate with a floating-like roof spoiler. The rear doors were the same as on the G70 sedan. It was only one mm (0.04") longer than its sibling.

Inside, the G70 Shooting-brake shared most of its parts with its three-box brother. It used the same elegant yet sporty interior with high-quality materials and an infotainment unit able to connect with Android Auto and Apple CarPlay. The main difference was in the back, where the carmaker installed a split-folding 40/20/40 bench to expand the trunk area.

Under the hood, the new version kept all the engines from its four-door sibling but adapted for the European market. 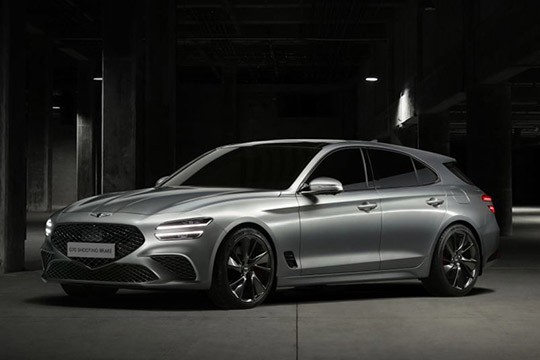