Ford introduced a brand new generation of its well-known pickup Ranger in 2021 and, to live up to its reputation, the carmaker introduced the Wildtrak version as well.

The Ranger was the best-selling pickup in Europe, the UK, and other countries around the world. Its simple construction, rugged chassis, and fuel-efficient engines made it a great choice over its competitors. Thanks to the U.S. know-how carried over from the F-150, the 2021 Ranger became even more desirable not only by contractors and used as a workhorse but also as a lifestyle vehicle.

At the front, its C-shaped daytime running lights surrounded the outer sides of the headlights, resembling those installed on the Bronco and the F-150. Its massive front grille was designed to accommodate larger radiators for the V6 turbodiesel engine and also incorporated a lower area fit for aftermarket winches. Ford worked together with ARB for that, so the owners received strong support for that. Finally, at the lower side of the bumper, the carmaker installed two recovery hooks.

Inside, on the center stack, the Ranger Wildtrak featured a 12”, portrait-mode infotainment screen fitted with the SYNC4 system. The electronic selector for the automatic transmission sported the buttons for manually engaging the gears sat between the front seats, on the center console. Next to it, a group of buttons controlled the transfer case.

Under the hood, the carmaker placed the 3.0-liter V6 developed together with Volkswagen. The German carmaker chose to partner with Ford for the Ranger/Amarok lineup. 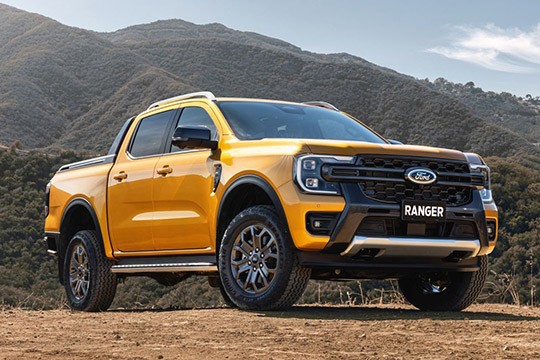