The Mustang Mach-E GT was not the kind of Mustang John Oros imagined in the mid-60s, but it was surely quicker than any muscle car from that era, even with five people on board.

Back in 1964, JFK was in the office, and Mustang started the pony-car culture. Fast forward almost six decades, and there were still unanswered questions about JFK, but we knew that the battery-powered crossover was far away from what Ford imagined about a sports car when it introduced the 1964 ½ Mustang.

Unlike the standard Mach-E, the GT sported a unique orange color and a few fine details that made it look different than its less-powered sibling. Its wide hexagonal black grille featured the iconic wild horse illuminated. The front bumper was different, while the apron featured the active grille shutters. A more aggressive splitter caught the air and diverted it to the sides through a pair of vents, creating an air curtain around the vehicle. The piano-black lower side sills made the profile look slimmer and lower to the ground from its sides. In the back, it was very similar to the regular Mustang Mach-E.

Inside, Ford designers didn't bother to enhance the look too much. Sure, there were some GT stitchings around the cabin on the seats, steering wheel, center armrest, and the door sills. But the bolstered seats were almost the same, and there were no unique carbon-fiber trims as expected in such a performance vehicle. 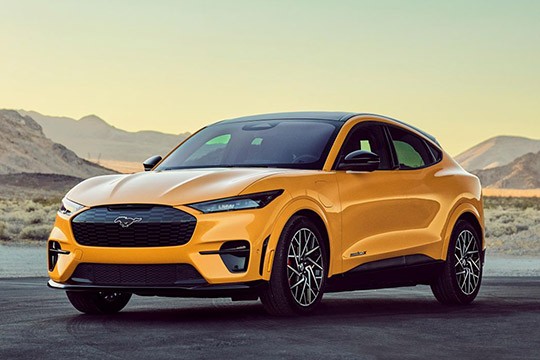